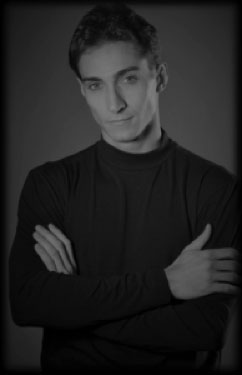 Born in Modena.
Eclectic artist, began acting at the age of 6 years. Since then his career is still growing, to become the complete artist that he is, he studied dance, acting and singing.
Numerous participations on television and theater. In Hollywood and in the great champion with M. Ranieri, directed by G. Patrons Griffi is also assistant director. And 'Phoebus and Gringoire in Notre Dame de Paris R. Cocciante. At the same time he recorded his first CD and creates movie soundtracks. It was part of the cast of the Musical The Count of Monte Cristo. In 2008 he starred in Othello rock opera. In 2009 he staged with Life on the stage and in several concerts with the Orchestra Swinger. In 2010 he starred in Jack the Ripper and 2009-2012 is Mowgli in The Jungle Book of SDT Music.